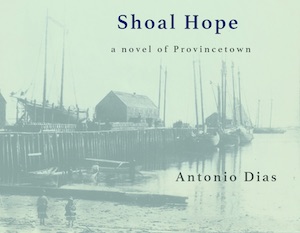 Unauthorized use and/or duplication of this material without express and written permission from this blog’s author is strictly prohibited.

Short excerpts and links may be used, provided that full and clear credit is given to Antonio Dias, and Antonio Dias Poetry with appropriate and specific direction to the original content.

From Wood End, or Herring Cove, looking west on a clear autumn day.
The hills of Plymouth break the western horizon.
Like a high island, lifted by the loom.
Floating above a glittering shimmer.
Sky encroaching from its edges, reaching
beneath looming land, curling in at each end.

From this sand spit, after its first impression,
from the east of a high bluff shore.
It could be Dover’s Cliffs, or Devon
or the last lingering view of Cornwall’s Lizard?
Until all its monumentality evaporates away.
As proximity brings it into focus.

From this sand spit, once explored.
It did not take long to see that it was an ephemera
of sand and wind. A plaything of the sea.
Not a new land, a new continent.

From this sand spit, first looking across at those hills,
on a clear day in late November or early December.
The harshness of the season closing in with the idea of a new land.
The single touchstone behind this perilous journey.
Those hills, floating above the sea.
A smudge of dark, more solid than the clouds.
Immovable, against the scend-of-sea as the light chop
crossed from southwest to northeast across the view.

From this sand spit, those hills stood for a new land.
The yearning that had been barely tripped-up
by this strip of sand.
Lodged on this promontory.

From this spit of sand, here was glimpsed the first
of the “Purple Mountains’ Majesty.”
That would continue to beckon westward across this continent.
New, or not new, to those who felt its tug.

From this sand spit today, knowing what lies beyond,
long enough for that yearning to have circled the globe entire.
Rubbing off every potential new promontory
any vestige of that naive,
yet hopeful, wish.

From this sand spit, where now too many come to visit,
or, to stay.
Longing for the very qualities
that appeared to have no value to them then.

From this sand spit, looking west.
Ticking off the meridians lost to date:
The misty forests of the Lebanon. The glades and bowers of Crete.
Green plains of Tripoli. Syracuse’s pines.
Carthage and Nova Cartagena desert now.
Lusitania, land of light!
Where the wide sea met deep forests along abundant shores.

California!
This word has held all that remained of that hope for a paradise to the west.
Burning, consumed by billions of greedy eyes around the globe.
The last of its promise lost in acrid, orange flames.
Visible from space.

From this sand spit, looking west.
Is it too late to take a stand?
To say that here is where I am.
That promise is not a place. That no idea should enslave.
Driving us to miss the point of what we have
and feed insatiable appetite
for its perfection. In a place that does not exist.
At least from this shore, it cannot be seen.

From this sand spit, looking west.
The elemental is all we have:
Air.
Light.
Water.
Sand.
Gulls that fly.
Transcending their gulled natures by that miraculous accomplishment.
Floating on air.

From this sand spit, looking west.
Earth reduced to grains worn down from rock. Laying at repose
where wind and water left them.
Anything upright is alive or human-made.
Water lays over half the visible world from here.
That already an understatement. More like seven-eighths, the truth.

From this sand spit, looking west.
The clarity of winter sun,
low all day, has lost its pull.
Can we resist, and not yearn, to follow
it west, and west, and back again?

From this sand spit, looking west…

9 thoughts on “From Wood End…”